on Orson Welles' Othello and Marlen Khutsiev's I Am Twenty 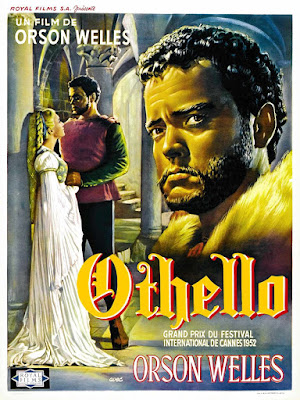 What are we to say of Orson Welles' Othello? As so many films in the protean filmmaker's career, this is not so much a finished work as one of his projects constantly in progress, upgrading and updating. It's not so much the film that Mr Welles had in mind as the film that could be done: a heavily abridged take on Shakespeare's tragedy of the Moor of Venice that stitches together material shot over three years in different locations, with different crews and even different casts. Even Mr Welles, playing the lead, looks clearly physically different throughout the film's short length. His Desdemona, the stunning Suzanne Cloutier, is dubbed in the final version by actress Gudrun Ure, and Mr Welles himself overdubbed many of the secondary performers' voices.

The genealogy of this Othello is quite convoluted: the only currently available version is daughter Beatrice's controversial 1992 restoration, one that has legally superseded all other versions and kept them out of circulation. Many specialists consider it a travesty of the director's own intentions, closer to the 1955 compromise Mr Welles put together for U. S. release rather than to the original 1952 director's cut that won the Palme d'Or at Cannes.

Yet, even among all the usual production problems, ownership issues and multiple edits that pursued the director after the Citizen Kane affair, Mr Welles' singular, expressionist, heavily theatrical vision for the tragedy stands out, crystalline and stark. Francesco Lavagnino's intrusive score is like the gossip of Venice permanently poisoning our mind, its constant cloying presence slithering its way into the background, dulling our senses - designed that way so we can understand where Othello's sense of unease and paranoia comes from.

The film's stop-start production makes all the sense within Mr. Welles' conception of Othello and Desdemona as mere puppets trapped in a labyrinthine web of lies, patiently woven by the villainous Iago, played by Micheál MacLiammóir as an all-seeing, all-powerful inverted "deus ex machina". The walls, chambers, cloisters of Venice become obstacles, traps, prisons for characters doomed by the outwardly genteel but inwardly prejudiced society represented by Iago and Roderigo (Robert Coote). A black man and a woman are forever resented for their difference and for their desire to be together in defiance of rules that, it turns out, were never meant to apply to them.

This Othello isn't as much Othello's as it is Iago's play, but there's nothing fascinating or magnetic in his archetypal villainy, relished by Mr. MacLiammóir in an almost pantomime way. What is remarkable is how, while playing fast and loose with the structure of the play, Mr. Welles reaches its core through purely visual means - sight lines, camera angles, staging - with a vivid sense of modernity that contrasts to other film versions of the Bard. To be sure, this is as much Shakespeare's Othello as it is Mr. Welles'; both polymath creators present and alive in every single frame of the film, even if the latter artist gains the upper hand. 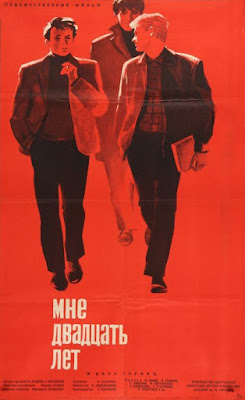 Another film that has suffered the indignity of multiple versions is Georgian director Marlen Khutsiev's I Am Twenty; it was initially finished in 1961 as Lenin's Gate, but, after denunciations from the Russian authorities (Nikira Khruschov included), Mr. Khutsiev was forced to return to the editing table. A new version finally surfaced in 1965 as I Am Twenty and, though awarded the Grand Jury Prize at Venice, fell through the cracks of the Iron Curtain even after its 1987 restoration, until the director's work started being reappraised in various festival retrospectives.

To be alive in Moscow, at twenty, with the future ahead of you. But what if all those singing tomorrows are no longer that promising? There's a remarkably free insouciance in the three childhood friends that enjoy their first breaths as adults - military service completed, jobs and residence secured, dances, parties, music, flirting, girls. And yet - and yet, slowly, Sergei (Valentin Popov) realizes there's something missing from life in this socialist workers' paradise. It's not necessarily political. It's emotional. It's human. It's knowing that there's more to yearn for than just the same old routine, and that the very security that the parents fought for and sacrificed so much for brings them no answers on how to live their life. How could it? Sergei's father died in WWII. He was younger than Sergei is in the film; he never had a family life, never faced the normality of daily living. This was one of the issues the Soviet authorities had with I Am Twenty: it freely admitted there was an individual issue at the heart of many families, one that wasn't exclusive to the Soviet Union and that couldn't be solved from the top down.

Mr Khutsiev had to change his impressionistic, fluid chamber epic of Moscow youth when the Russian authorities were displeased with the existentialist questions his insouciant young men and women asked of the world. Yet, it's astounding how the spirit of freedom and levity that runs abated through I Am Twenty has crystallized it so much as a film not only of its place but also of its time: the early 1960s and its cultural winds of change, manifesting simultaneously in France's Nouvelle Vague and in many other countries.

I Am Twenty breathes with its time. It changes. It moves. It dances, it flits, it is able to - at times- create magic out of the sheer movement of its dancing, giddy camera and the images it brings together. Margarita Pilikhina's bold b&w cinematography is as stunning as Raoul Coutard's was in the early days of the Nouvelle Vague; Mr Khutsiev's film is contained in its title, an entire programme. This is the world that was. The questions are the same we still ask today.