ON FINDING SURPRISES AT LOCARNO AND LOVING BLACKKKLANSMAN — AND THEN GETTING HIT WITH THE MEG.


Let me restate it: You spend nine days in a film festival like Locarno, shuttling between films. Looking for that high, that strange urge to see something you’ve never seen before and that makes you look differently at film, open other doors, make you see stuff with new eyes.

And yes, there were highs, there were surprises. To be fair, they weren’t necessarily unexpected, in the sense that these were not proposing something completely out of the ordinary, or something you’ve never seen before. What they did do was make us look differently at stuff we’ve seen before, or even find new ways to talk about it.

Turner-nominated photographer Richard Billingham debuted on the big screen with the arresting and incredibly moving Ray & Liz, a piece of stunning (auto)biography extending from his previous work with his family, turning the British kitchen-sink social realism inside out by framing it with all the exquisite attention to detail of someone like Terence Davies. Ray & Liz, three episodes in the council-flat life of Billingham’s parents on the Thatcher-era dole, does not traffic in fake heritage nostalgia: blunt, brutal and painstakingly recreated, these are highly concentrated memory compounds, delicately framed by a director who finds truth in what’s happening within, yet just outside, the camera. Not wanting to jinx him, it’s such a personal work that it begs the question if Billingham has another film like this in him – but regardless, Ray & Liz is one of the great debuts I’ve seen these past years, and it’s so good it literally hurts (though shut out of the main awards, it did get a special mention of the Locarno jury). 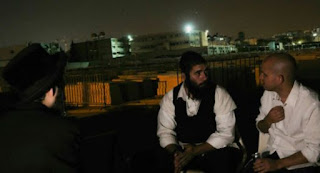 Yolande Zauberman, the French director who made a few waves years back with Clubbed to Death, also reappeared in the main competition with M, a sucker-punch of a documentary that, on paper, seems to tick all the boxes of the topical problem picture: child abuse, queer sexualities, estranged families, etc. But it starts on a beach, at night, with a man first speaking about his experiences and then singing about it in a voice that can be described as heavenly. The sacred and the profane are constantly intertwining in the tale of Menahem Lang, the subject of Zauberman’s film, someone who has literally gone to hell and come back: he was raised in an ultra-orthodox and highly purist Jewish community near Tel Aviv, experienced sexual abuse at the hands of his elders and left to live his own life when he realised the community wouldn’t do anything. Lang went public with his experience and is looking for closure, solace, belonging; as if he “betrayed” the community by making explicit what everybody knew but didn’t talk about, while those responsible for his pain, the real betrayers of his trust, went on with their lives. Shot over a few years and mostly spoken in Yiddish – the language of the “world capital of the Haredim” - M grabs you by the hand with that first beach monologue and does not let go of you, urgent, feverish, grumpy, angry, but ultimately a boisterous, joyful journey away from the night and into the light.

And there was the Korean master Hong Sangsoo, an acquired taste I’ve grown to love more and more (even though I still dislike strongly Night and Day, the very first film of his I saw). Most of his latest work is less evidently playful and more openly melancholy than earlier, with the romantic roundelays and drunken humiliations giving way to a more reflective, stock-taking tone. After the dazzling summation that was Grass – a model of economy at only 65 minutes! - Hotel by the River is a thoroughly breathtaking meditation on life and how to life it that carries something of a testament within. With his usual repertory company of actors, Hong weaves elegantly a sad comedy of revolving doors, involving a poet in crisis, his two estranged sons, a young woman licking the wounds of a romantic break-up and her best friend, all of them criss-crossing in the titular hotel in a shimmering black and white. There will be drunkenness, yes, and clumsy masculinity, also, but an ease, a peace with one’s flaws that can come only from time, a kind of Bergmanesque stillness I’ve not really seen in Hong before.

And then you get back to real life and you’re hit, first, with The Meg – the giant-shark movie that had been written off as a dud and became an unexpected box-office success. It’s still a dud, and a really big one – for a big-budget film that was in development for years and could afford all the CGI that money can buy, it’s a cheap, cheesy, trashy programmer, a toothless affair with little blood and gore, where everybody seems to be working in different movies. Even Jason Statham, who is usually quite dependable as an action hero, seems to be off his game, but the big problem is not that The Meg is bad – it’s that it’s not bad enough. It wants to have its cake and eat it: be a serious giant-shark movie that winks at its viewer and says “this is all for laughs”, but it’s too cheesy to be taken seriously and not winking enough to be fun. It’s stuck somewhere in a thermocline it can’t get out of, two hours of noisy, forgettable entertainment that was probably audience-tested or executive-second-thought to an inch of its life.

Then you get The Spy who Dumped Me, an accidental-spy comedy with Mila Kunis as an LA health-store cashier and Kate McKinnon as her free-spirited bestie who get roped into an international spy ring because Kunis’ ex (an adequately smarmy Justin Theroux) is a CIA agent. Both Kunis and McKinnon are gifted comediennes and the premise is strong, but Susanna Fogel’s film, which tops out at a mind-numbing two hours, is painfully unfunny – she seems to do best at the action scenes (of which there are many) than at the comedy, letting McKinnon run so far away with her role as oblivious bestie that the character first steals the film from under Kunis and then becomes seriously annoying at the half-way mark. I felt as if I was watching a female-centric Mission: Impossible pastiche that lacked all the drive, swiftness and elegance of the sixties spy kaleidoscopes done by the great Stanley Donen.

The Happytime Murders isn’t much better, though at least it tries: Brian Henson’s muppet murder mystery spoof for grown-ups is a technical feat of puppetry let down by a script that overdoes it on the F-bombs and goes often for gratuitous shock value. “How fun would it be to see a puppet have sex and ejaculate furiously silly string?” is a valid gag, but it’s really not that funny to begin with and even less so when you stretch it past breaking point. At times, you see what could have been – some of the quieter moments are lovely, many of the throwaway sight gags are inspired – but Henson can’t muster the comedic timing or the tone that would make it all work together. It’s an embarrassing case of you wanting it to be good, and dismayed that it isn’t. 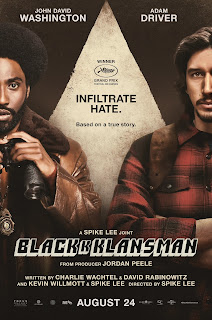 There is, however, a saving grace in the horizon. He’s called Spike Lee and with BlacKkKlansman he’s just lobbed a challenge to contemporary American film, wherever it’s coming from. It’s an incendiary yet incredibly traditional piece of filmmaking, at its heart a classic police procedural with touches of Don Siegel or Sidney Lumet and a lot of seventies poise and references turned into a fiery denunciation of ingrained American racism, through as the true story of Ron Stallworth, the black rookie cop that infiltrates a Colorado chapter of the Ku Klux Klan. It’s a far from perfect movie: overlong at slightly over two hours, the score by regular contributor Terence Blanchard, with its classical overtones, often backfires on a story that requires the staccato riffs and slinky grooves of seventies blaxploitation funk.

But who cares? All of that pales along the sheer nous and energy Lee brings to the proceedings. I’ve always thought – and his best films, stuff like the masterpiece 25th Hour or Inside Man, prove it – that Lee could be one of the great classic New York filmmakers alongside Scorsese or Lumet. What he does in BlacKkKlansman is stunning in its genre smarts and effective, economical handling. It’s just that Lee prefers to douse his classicism in gasoline and throw it into the auditorium because there’s shit that needs to be said and being polite isn’t going to help him say it. (Oh, that cross-cut between the Black Students Union event with a regal Harry Belafonte and the KKK initiation ceremony, ones shouting “black power” and the others “white power”, in a chilling, thought-provoking, utterly provocative decision of mise en scène.)

Overlong, over-thought, over-done, oh hell yes, BlacKkKlansman is all that but it’s also an irresistibly arresting film that just takes you along for a hell of a thrill ride, a scorched letter to (and from) modern America disguised as a cop movie (and aren’t John David-son-of-Denzel-Washington and Adam Driver an amazing pair?), a film for today made by a director with nothing to lose and nothing to prove who still throws himself into every project as if he had everything to lose and everything to prove. There’s more energy, more faith, more life in a single scene of BlacKkKlansman than in most of the sedate films I saw at Locarno – and not just because of Lee’s fire-and-brimstone righteousness, but because the dude can film. Boy, can he film. 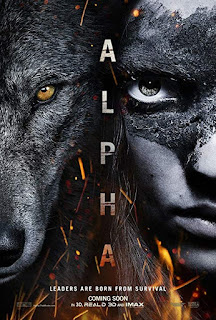 While everyone else is out there protesting against the lack of diversity in Hollywood, and while BlacKkKlansman makes a point of playing up the race card, it’s telling that no one’s talking much about Alpha: a wannabe blockbuster entirely spoken in an invented pre-historic language and directed by Albert Hughes, stepping out on his own without brother Allen. A black director handling one of the most left-field adventure movies made in recent Hollywood (though, to be fair, the Hughes brothers made a point of stepping outside the “black film” trap with stuff like From Hell or The Book of Eli) – and nobody’s saying anything. It’s telling.

It’s also due to the fact nobody quite knows what to do with Alpha – and Hughes apparently didn’t either, veering from a sort of Quest for Fire adventure epic to a coming-of-age story to a Disneyan tale of boy-bonding-with-wolf. After a tone-perfect start, Hughes lets Alpha become a polished, overly pretty work, candidly self-serious in its unwitting gravity. It’s not the only problem of the film: the very derivative score by Michael Stearns and Joseph de Beasi seems to work against Alpha, minimizing the images instead of making them bigger and grander; and there’s a flat, affectless lead performance from Aussie Kodi Smit-McPhee, yet so good as Viggo Mortensen’s son in The Road.

All of this seems to explain why Alpha’s release was delayed for nearly a year and the film appears in the summer doldrums. Yet there is genuine vision and daring in Hughes’ attempt at mostly visual storytelling, letting action and setting lead the way rather than dialogue (not a bad idea, since the dialogue that there is is woefully basic). And this isn’t a story about super-human super-heroes, but about early humans learning to navigate a savage world. There’s something refreshing about that, even if Alpha doesn’t live up to its promises.

Still: each new dimming of the lights and opening of the curtain brings with it a hope for something else, something more, something new. The quest continues.