On HAPPY END, KNIFE + HEART, THE SEAGULL and TWO MEN IN MANHATTAN


Was there ever a moment in history when families weren’t dysfunctional? I’m quite sure the word was not in general circulation when noted Russian playwright Anton Chekhov was alive (though I’ve not gone to the trouble of fact-checking that, sorry). But the concept itself, I fear, was already there, since it is very much universal and timeless. Noted stage director Michael Mayer seems to go out of his way to point out how the family at the heart of Chekhov’s 1895 classic play The Seagull are as dysfunctional as you can get: a series of tugs-of-war between personality and facade, projection and reality, depth of feeling and shallowness of status, performance and being.


At its core are the fleeting charms of celebrated actress Irina and the heightened teenage dramas of her rebellious son Konstantin, a struggling writer in search of a new and radical language. Fated to disappoint each other, constantly at each other’s throats, the classic stage diva and the avant-garde son are burning flames to which the moths around them are constantly attracted while trying to not get burnt. Into this unstable equilibrium enters a third flame: country girl Nina, the dazzling muse of Konstantin’s tortured creations and a dangerous rival to Irina’s aging charms for the affections of Boris Trigorin, the writer du jour in Moscow who is the actress’ current paramour.
The one bright idea of Mayer and playwright Stephen Karam, who adapted and abridged the play for this screen production that runs slightly over 90 minutes, is to underline how everyone is looking for something they can’t have through a would-be Ophülsian roundelay of unrequited love to which only Irina’s ailing brother, Sorin, the retired politician hosting everybody at his country estate, seems aloof to it.

Irina desires Boris and ignores the obvious infatuation the local doctor has with her; Boris, however, is already smitten with the possibilities opened to him by the ravishing Nina - whom Konstantin loves madly, to the point of even challenging Boris to a duel. In the meantime, Masha, the foreman’s daughter, is as madly infatuated with Konstantin as her own mother Polina is with the doctor, while the local schoolmaster is angling for Masha despite her total lack of interest in him.

Chekhov was a master at turning the mood from frivolous to fatalistic on a dime (he did describe The Seagull as comedy), and both Mayer and Karam respect that. But their approach, amplified by the script’s construction as a flashback, is to make this roundelay visible by setting the camera loose, roving among the walls, rooms and gardens of the estate. In effect, the camera becomes a whirling, floating witness that puts its first-rate cast on the spot, always on point, and elicits wonderful, attentive ensemble performances. But in constantly looking for what is happening elsewhere, the film draws our attention away from the here and now.

Combined with Karam’s modernized English dialogue (though the story is set in the early 1900s), this creates an unnerving sense of off-key urgency, the feel of a production whose valid ideas are lost through uneven execution. Maybe they were trying too hard to draw parallels with contemporary dysfunctional families, to make sure The Seagull resonated with modern audiences – but the play may not have needed that in the first place. 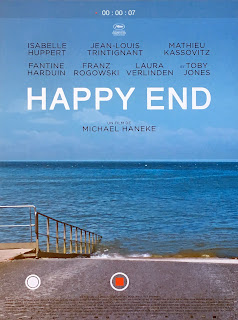 The current master of dysfunctional families may very well be the Austrian provocateur Michael Haneke (Funny Games, The White Ribbon, Amour), whose disturbingly precise, naturalistic films seem to zoom in to the darkness hidden inside the average human. His latest, unveiled in competition in 2017 at Cannes, confirms the director’s heavy-handed yet on-the-nose sense of irony: set in Calais, home of the infamous giant migrant camp, it’s called Happy End and follows a wealthy bourgeois family’s slow-going disintegration as it gains downhill speed.
That this lot is dysfunctional goes without saying, not only because Haneke has made a point of bringing to light the dark power of family secrets, but also because at the family’s heart is the ever-steely Isabelle Huppert, one of the director’s regulars. As first among equals in what is more of an ensemble piece, she plays Anne, the divorcee who not only runs the Laurent family business but also pretty much the family itself.

As the film begins, they seem to be literally under siege from the world, trying their best (if often obliviously) to deal with one thing at a time, despite having everything coming at them at the same time. Anne is trying to juggle a long-distance relationship with one of her bankers with the problems raised by a landslide in one of their building sites; this puts the lights squarely on her son Pierre, who runs daily operations and, convinced he’s not up to the family standard, begins spiraling down. Her brother Thomas, a successful surgeon with a young wife, a newborn baby and a sideline in trysts takes in Eve, his teenage daughter from a prior marriage, whose mother attempted suicide. Last but not least, patriarch Georges, approaching 90 and feeling his mind slowly slipping away, no longer wants to go on living.

Said patriarch is played by one of the great European actors of the 20th century, Jean-Louis Trintignant, who is approaching 90 himself and has all but retired - except if Haneke comes calling. This may be the same character from the director’s previous and devastating Amour (though whether there is an actual link between the films or just the suggestion of one only Haneke can say), but Georges, along with the still young but already hard-bitten Eve (in a remarkable debut by the Belgian teenager Fantine Harduin), are the only ones who are truly aware of the frailty and loneliness of life, while everyone else tries to stay in their bubble of wealth, luxury, status and complete obliviousness and selfishness.

Haneke’s films can appear to be exquisitely laid out laboratory trials where human beings are subject to cruel demiurge experiences – there are almost no close-ups in Happy End, everyone is always framed in context, making for an unmistakable yet uncomfortable feel the viewer is being surveilled as much as the characters. Here, there’s a sense of a window into another world that is ours yet isn’t, and the feel that, like Georges himself, it’s a world about to collapse. And yet, everyone is hanging on by the skin of their teeth. 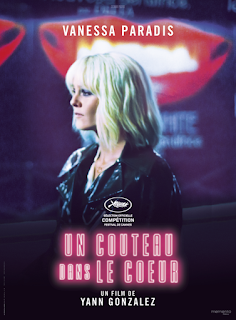 It’s the first of a series of grisly yet tasteful murders that seem to chase Anne and that she, in turn, will attempt to solve on her own, since in the great tradition of Dario Argento’s classic 1970s giallos no one is going to help her. Gonzalez’ heart is in the right place, but he seems to lack the transgressive darkness and out-of-nowhere surprise that made the originals so daring and startling; Knife + Heart is more than a mere genre pastiche, as the care put into the respect and emulation of the giallo style evinces, but its loving attention to detail is so precise and painstaking that it all but minimizes the genre’s trashy sensibility.
If anything, Knife + Heart is naïf giallo, playfully making out with gay porn and supernatural horror before resolving itself in the kind of throwaway B-movie plot that delighted second-run theaters in the 1980s. That’s what Gonzalez had probably in mind – the coup of casting Vanessa Paradis as Anne and asking her to wear a blonde wig reminding of seventies siren Mireille Darc place the film in a long genealogy of offbeat, hardcore genre cinephilia. It also means he didn’t take his enticing project as far as he could have. 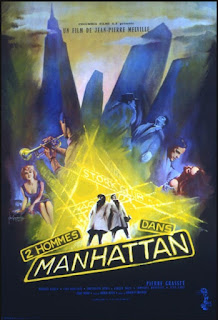 Since we’re talking French genre, let us take a look at Two Men in Manhattan, a 1959 curio directed by, written by and starring the most American of French directors, Jean-Pierre Melville. Melville is, of course, the author of one of the greatest classics of the 20th century, the zen masterpiece that is Le Samouraï, and creator of a unique French take on American genre that is all his own.
In Two Men in Manhattan, his fifth feature and follow-up to the much admired Bob le Flambeur, we have an actual noir mystery whose locations were shot in NYC, following two French newsmen investigating why the French ambassador to the UN cannot be found. Plot and characterisation are awkwardly sketchy, lacking the terseness of later work, with standard chalk-and-cheese heroes - a reporter who won’t stop at nothing, except ethics, to get his story (Melville himself, credited only at the end), and a photographer who won’t stop at nothing to make money (Pierre Grasset).

Melville is aiming at the grey area of complex humanity that noir made central to its plots, but here it comes across as a desire of complexity that is insufficiently developed. And it’s no wonder: the director was so fascinated by the city that never sleeps that the extraordinary location sequences filmed by the expressionist camera of Nicolas Hayer become the film’s very raison d’être.

Melville once said in an interview he wasn’t interested in realism, and Two Men in Manhattan is proof of that: the reality of the New York streets is turned into a stylized fantasy nocturne drinking from Weegee’s photographies and Samuel Fuller’s headline hardboiled. It’s recognisably Melville, yes, but it is also recognisably early Melville, a fascinating but thin step on the road that would lead to Le Samouraï, Le Cercle rouge or Army of Shadows.